In our prior two articles we discussed the great amounts of heat generated by the process of making concrete. Managing how quickly the concrete dries and its internal temperature while drying are important to ensure that the ideal combination of strength and longevity is reached with the finished product. The end result may not be as enduring as the Roman concrete we mentioned last month, but it can be incredibly durable, as is the case with the concrete in Hoover Dam.

You may think that Hoover Dam was just one big, continuous concrete pour. That was not the case, however, and it was primarily due to the aforementioned problems with heat. Engineers calculated before the build that if the dam was made by pouring one giant wall of concrete, it would have required 125 years for the concrete to cool down to normal temperatures! As it is, the heat generated by the construction was enough to bake 500,000 loaves of bread every day for three years!

Therefore, two steps were taken to make sure that the heat generated by the formation of concrete was sufficiently dissipated, thereby making a dam that avoided cracking. The first step involved building Hoover Dam in stages. The structure is actually formed from trapezoidal columns that were only poured five feet at a time. That way the concrete in each stage could be allowed to cool and harden independent of the other columns and the lower stages.

In addition, one-inch diameter pipes ran through each stage, circulating the nearby river water. After an initial cooling, even colder water from a refrigeration plant completed the job of steadily cooling the large forms filled with concrete. Once the concrete block was finished, the pipes were filled with grout, ensuring that each column was completely solid.

Altogether, the amount of concrete used to make Hoover Dam is greater than the mass of all the stones that were in the Great Pyramid of Giza. Certainly, people living downstream of Hoover Dam hope it lasts just as long as the pyramids and continues to provide the electricity that lights their homes.

You don’t deal with the same amount of concrete as the engineers of Hoover Dam, but you still want your foundations, walkways, patios, driveways, or floors to look good and last a long time. California Custom Coatings can help with epoxy coatings and concrete protectants that both colorize and preserve the surface of your concrete. You may not be building one of the Wonders of the World, but that doesn’t mean your concrete can’t look wonderful. Talk to us and find out how to make it happen! 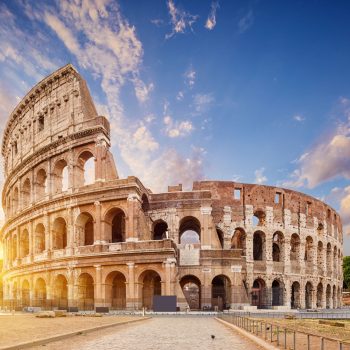