The Roman Pantheon — An Ancient Wonder in Concrete

The Roman Pantheon — An Ancient Wonder in Concrete

As mentioned in a previous article, Roman concrete is very durable and many structures built by this ancient society survive to this day. Amongst them is the world-famous Pantheon, built during the reign of Emperor Hadrian in the early second century. When tourists and locals visit the Pantheon they likely notice the granite columns, marble floor and Roman brick, but the key component of this massive domed building is indeed concrete!

The Encyclopedia Britannica describes the Pantheon at over 71 feet in height (as tall as a 7-story building), with an inner dome diameter of 142 feet (nearly half a football field). A dome of such size was not built again until the 1800s, yet the foundation, walls, and dome are primarily made of simple concrete. Granite columns do support the outer porch roof, and brick covers parts of the exterior and provides stress relief in the form of arches (especially important while the concrete cured). This composite building has lasted over 1800 years without significant alterations or repairs, yet all of the concrete is unreinforced!

The Importance of Engineering and Architecture

When you build even a simple concrete pad for a patio, porch or driveway, it is important to include reinforcing steel rods or gridwork to give the concrete extra strength. How much more important then is reinforcement in a seven-story building! Modern architects would never build a dome like the Pantheon’s without it! Yet the Roman architects succeeded wonderfully in this difficult task, as evidenced by the fact that the Pantheon still stands. How did they accomplish this task?

According to modern engineer David Moore, two factors play an important part in the Pantheon’s durability. First, the aggregate (small stones or gravel that gives concrete strength and stability) used in the building changes with height. Lower portions of the walls use heavier aggregates like stone, while the dome aggregates are lightweight pieces of brick. By reducing the weight of the concrete as the height increased, the engineers reduced the stresses generated by the building’s own mass, especially that of the giant dome.
Secondly, the design of the dome in its lower portions is like an upside-down ringed bowl with seven rings. This architecture required the dome to be built over a period of four to five years for concrete curing, yet it also simplified the building process. The largest ring sits halfway onto the walls, and halfway suspended over air. During the laying down of the concrete, the suspended portion was undoubtedly supported by scaffolding. When the outermost ring was completed cured, the next concrete ring was poured in the same manner and so on, until the final part of the building was poured as a smooth dome structure. This limited the necessary amount of scaffolding and guaranteed that the concrete would be stable. The outside was then covered in protective metal plates, first made of bronze, now made of lead.

How to Make Your Concrete Last?

You may not have an engineer or an architect on your side when you build a patio, walkway, or foundation. And you’ll likely not be using the extremely durable Roman concrete. So besides using reinforcing steel, what can you do to protect your concrete? The Romans covered the Pantheon with non-reactive metals, but we doubt you have any lead lying around, nor would you want to use it!
The easiest way to protect your concrete exterior is with epoxy coatings. Decorative and durable, whether used inside or outside, epoxy may not last for 1800 years, but if it’s laid down by California Custom Coatings you can believe that it will last for the lifetime of your concrete and extend that lifetime too. For help with epoxy coatings for concrete in Sacramento and Northern California, contact California Custom Coatings today! 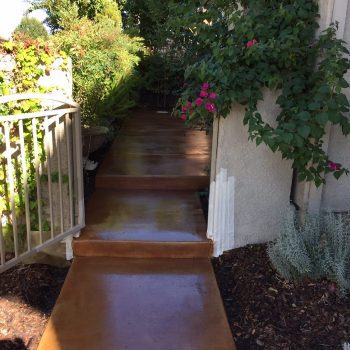